The active works of Emili Ametller 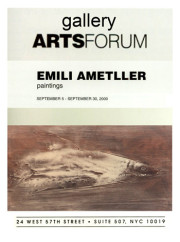 It will be important not to be confused, not to lose sight of the primary subject matter when gazing at the spectral imagery of Emili Ametller’s paintings on linen. Such a remonstration is necessary when viewing art that is so guilelessly (and not in small part evocatively and dexterously) moving. It will be easy, for example, for us as viewers to be enchanted with the narrative powers of the artist and the richness of his anecdotal details in work such as Round Shapes, or in The Offering, in which  a small bird proffers a token to the minotaur who is leaning against a marble balustrade. In the latter painting, the gift, a small round stone carried in the bird’s beak, becomes the centre point (literally) of action in this painting. The ”action” I am referring to here occurs on several in all of Ametller’s art. These various levels are the touchstones of Ametller’s pictorial intentions. This “actions is the main subject of the art.

One of the actions (in the narrative sense) is the heightened drama of non-actions. The action of the interlude. The moment between actions when the air is heavy with unspoken yet understood communion between sentient beings and inanimate objects. The action of being. Here, the air in the artist’s works is filled with a sense of drama whose main ingredients is pervasive stillness punctuated by mysterious expectancy. Ametller’s paintings are filled with actions of another kind: there is a tumultuous undercurrent of painterly energy coursing through the brushwork activity – this is evidently actions painting – of a distinctive type inverted by Ametller.

The artist has devised a unique painterly technique he has called estocàstica to produce spectral freeze-frame images that are filled with an in-dwelling ambient light. According to the Catalan Encyclopedic Dictionary estocàstic means “the process that studies the evolution of a system in which the law of probabilities depends on time“. Yet another type of action —that of alterity— also informs Ametller’s works. His images on dark background are produced by applying thin ripples, splashes and waves of thinned liquefied latex paint over linen surfaces that have already been primed with latex. From this resist-method the artist allows the material to suggest to him what shapes are to emerge and dominate the picture plane while he folds and enfolds wed surfaces with a spatula-type tool that he uses as his brush. The mysterious, phantom-like forms that result appear to be made of constantly shifting elasticized membrane-like veils of paint. This veiling of paint is the embodiment for Ametller’s figural and gestural impulses that coalesce to form and un-form recognizable imagery imbued with luminous semiopacity. The works, with their overexposed, drained, look seem alien and other-worldly.

The artist’s washes and his phantasmic effects are applied towards still lifes, mythological scenes, figure studies and portraits recollected from dreams and mirages. His imagery has developed as if they were silent afterimages in the mind that have cohered to startle us with their iconic boldness. Emili Ametller’s imagery gives the viewer’s mind the time and space to reflect: a mental action that cannot help but by stoked by the artist’s evident play of metamorphosis that informs all of his work. The artist’s startling visual effects surprise us with their dried pools and eddies of skin colored latex paint that seem both wet and transparent. The interweaving and shifting between figure and form, figural and non-figuration, opaqueness and transparency is a painterly exploration of the crumbling of the body’s boundaries by the invasion of space.

The artist’s efforts chart two simultaneous and seemingly contradictory acts. The first act is that of mimicry: the physical and optical resemblance of the paint quality to photo emulsion in Ametller’s work recalls photography’s greatest myth as the faithful mechanical and objective recorder of indexical reality. The second act is that of gestural expressionism as the faithful subjective recorder of somatic and psychic actualities of the art’s maker. These two impulses in Ametller’s art are generated within the twined laws of alterity and mutation. One finds in them parallels with the Surrealist’s exploration of l’informe, particularly in the photo-emulsion and solarization works in the late twenties and thirties of Man Ray, Maurice Tabard and Raoul Ubac. The painterly exhibitionism of Francis Bacon’s hysterical bodies is also reflected in the amorphous blurs of Ametller’s figural notations.

The artist’s final, significant act is clear: he will give us the road map but he will not take the journey for us. The result is a visual experience filled with latent tension and power. It is for us to experience the psychic analogy to his visual conundrums: Matter and life-forms tottering on the edge between opaqueness and translucency composition and decomposition, dissipation and coherence, illegibility and intelligibility, fracture and wholeness. The contradiction between a coherent moving body, its disintegration and the simultaneity of broken and integral form is thus visually re-enacted in each of Emili Ametller’s haunting paintings.

Dominique Nahas is an independent curator and art critic living and working in Manhattan. He is former Chief Curator of Contemporary Art at Everson Museum, Syracuse, NY, and former Director of the Neuberger Museum, SUNY-Purchase, NY. Among his many exhibitions, he was responsible for the curatorship of the American retrospectives of artists Les Levine, Nancy Spero and Osvaldo Romberg. He also works as the New York editor for the Toronto, Canada, based D’art magazine and as a reviews critic for Review, Flash Art and Art in America.